Exmouth Magnolia grandiflora is a native of the south-eastern states of the United States and was brought to Europe in 1726 after being collected by Mark Catesby, a botanist who wrote The Natural History of Carolina in 1730. The name honours Pierre Magnol, a professor of botany from Montpellier, France.
'Exmouth' is the oldest English clone. According to Devon horticulturist and plant historian Caradoc Doy, it was grown in the early 18th century in that Devon town by Sir John Colliton.
The original tree was rented to local nurserymen on a rotational basis so they could produce more plants. In 1794 disaster struck and the original tree was accidentally cut down.

Grandiflora Exmouth Magnolia
Sold in a 3” Pot
Available: Oct & Nov
Usually grown for a larger feature tree. Has a bigger leaf than the little gem magnolia 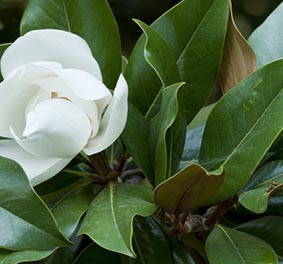 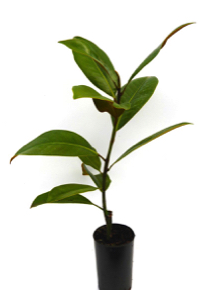